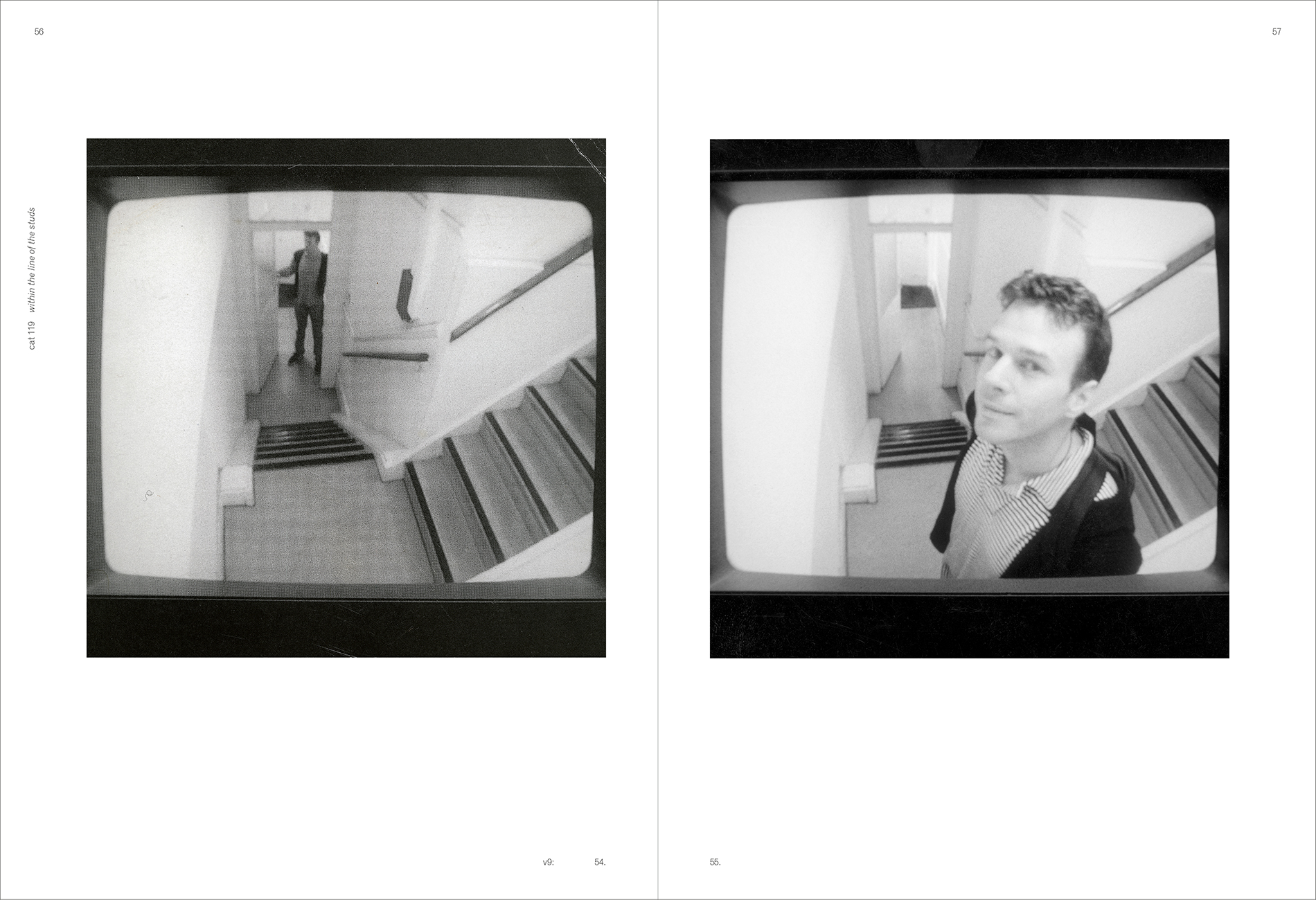 A catalogue raisonné of the sculptural work of Glen Seator / 14 volumes
Glen Seator: Making Things Moving Places is currently in production and will be published by Steidl in 2023.

Please click on the volumes in the sidebar to view selected layouts and specifications.

Over a brief but intensely productive period from his emergence on the New York art scene in the late-1980s to his untimely death in 2002, Glen Seator engaged architecture as the central subject and material of his sculptural work. While his spectacular architectural reconstructions at the Whitney Museum of American Art in New York, White Cube Gallery in London, Capp Street Project in San Francisco, and Gagosian Gallery in Beverly Hills drew broad public attention and acclaim, for practitioners – both artists and architects alike – the work posed unexpected yet fundamental questions about a human subject’s relationship to built space.

Seator’s work investigated a central problem: one cannot experience and ascertain in an immediate way, with the senses, what one knows to be true about built space. His method was deceptively simple – to observe, reorganize, dislocate, and relocate built spaces. The terms changed with each project, ranging from practically unnoticeable interventions to full-scale, fully-built architectural reconstructions. The works performed on the viewer by provoking mistakes and setting up challenges of observation and attention in which the viewer could not prevail. Failure, along with everything it reveals about the human being, was Seator’s method and purpose.

Making Things Moving Places catalogues 127 sculptural works produced by Seator from 1980 to 2000, including his early cast sculptures and a significant yet virtually unknown body of work realized in the studio from 1990 to 1995 that served as a basis for his more widely known architectural reconstructions. Also included is extensive posthumous documentation of Seator’s unfinished architectural project at his home at 12 Duffield Street in Brooklyn. Only a handful of these works survive, and only a small portion of the oeuvre was documented in publications during the artist’s lifetime.

Parallel to the catalogue of 127 sculptural works, Making Things Moving Places catalogues 1,532 primary sources from the artist’s archive, including sketches, notes, studies, writings, materials samples, photographic documentation, public statements, architectural drawings, correspondence, and mock-ups. These are the building blocks of a story that extends beyond the finished works as they were presented to the public, allowing the reader to enter into and follow the thoughts and observational processes of the artist.

Structure and Scope of the Project

The manner in which works are grouped into volumes, which is roughly but not strictly chronological, follows Seator’s own conception of the salient groupings and organizational principles at play in his oeuvre.

The scope of presentation is shaped around Seator’s understanding that each work encompassed object, process, context, observation/perception, and maintenance all at once and that the works posed perceptual challenges to both the maker and the viewer that could not be adequately represented in photographs of the work or in language. What constitutes the work? How far does a work extend? What does it encompass? How malleable, unfixed, or permanent is a work? These are fundamental questions at the heart of Seator’s project that determine the scope and organization of the fourteen volumes.

A work in the catalogue may be represented by a single source or by hundreds. Five of the fourteen volumes are devoted to individual works. The presentation in each case is determined by the boundaries of a work as conceived by the artist as well as by the scope of extant archival and supplementary sources. Works with no extant visual documentation are represented by a catalogue entry alone. The editorial approach is to reproduce all relevant sources related to a work, eliminating only highly tangential or repetitive sources. In this way, the catalogue raisonné serves as an effectively complete portable archive of Seator’s work and work processes. A second editorial guideline is to allow the sources to speak for themselves, without editorial mediation. The consequence is that the reader must engage actively with the primary sources to discover all of the details of a work and may succeed or fail based on the quality of observation. The sources have been selected, organized, and sequenced to support the reader in putting together both a detailed understanding of individual works and a broader understanding of Seator’s artistic concerns. However, editorial comments are limited to filling in pertinent facts about the works that cannot be ascertained through careful observation of the primary sources. These are placed at the back of the volumes in order not to distract the reader from the primary visual activity.

The publication was carried out over a period of just over twenty years during which the entire archive was scanned at Steidl and Little Steidl using Heidelberg drum scanners equipped with a rare analog photo-multiplier technology. The scans were made in the largest color space available today (LAB), allowing for an unusually extensive information capture that ensures not only the preservation of deteriorating sources but also that print reproduction can be carried out at the highest quality. Supplementary sources were created and assembled to fill in gaps in the archive.

Making Things Moving Places was developed and realized in a manner that runs parallel to Seator’s own labor- and observation-intensive work process. The archiving, editing, design, typography, image restoration/reproduction, separations, and proofing were all carried out personally by the author/editor of the work. The books will be produced using a wet-on-dry offset-lithographic printing method in which each of the inks is printed individually and allowed to dry for 24-48 hours before the next color is overprinted. The method is analogous to building, as the printer must be acutely aware of the structure of an image as it emerges over a series of 4-8 days. The result is a pronounced physicality, heightened detail, and an exceptional tonal range in the prints.

Nina Holland is the owner and director of Little Steidl Verlag in Göttingen, Germany, where is devotes herself to carrying the Steidl publishing tradition into a second generation. Her work in bookmaking extends to all areas of the discipline, including editing, design, image reproduction, printing, and binding. Her collaboration with Gerhard Steidl began in 2002 with the Glen Seator catalogue raisonné. She launched Little Steidl first as an imprint of Steidl in 2005, and relocated to Göttingen in 2011 to pursue a seven-year-long master’s apprenticeship in printing at Steidl while developing Little Steidl into a separate publishing house with its own independent production facilities.

She has worked in long-term collaboration with many contemporary artists, including Lawrence Weiner, Robert Therrien, Chuck Close, John Baldessari, Graciela Iturbide, Greg Colson, Jan von Holleben, Anthony Wilson, and Glen Seator. Her printing work is specialized in the area of experimental and bespoke printing processes that she develops for individual artists. Holland’s work on the Glen Seator catalogue raisonné has garnered major grants from the Andy Warhol Foundation, the Graham Foundation for Advanced Studies in the Fine Arts, the Judith Rothschild Foundation, and the Peter and Carmen Lucia Buck Foundation along with early project development support from the Getty Research Institute.

Holland studied visual art, music, and music theory from her early childhood, attending California Institute of the Arts (CalArts) in her youth, then the conservatory high school for the arts, Crossroads, in Los Angeles, followed by Sarah Lawrence College, where she earned her B.A. with a concentration in critical theory and comparative literature. She was awarded the Serranus Clinton Hastings Fellowship to study legal theory at Hastings College of the Law, and after two years, returned to art as editor and consultant for a broad range of publication, exhibition, and development projects for arts institutions, artists, and architects, including David Wilson/Museum of Jurassic Technology, the Getty Research Institute, and MAK Museum für angewandte Kunst (Museum of Applied Art) in Vienna before her path converged with Steidl’s.